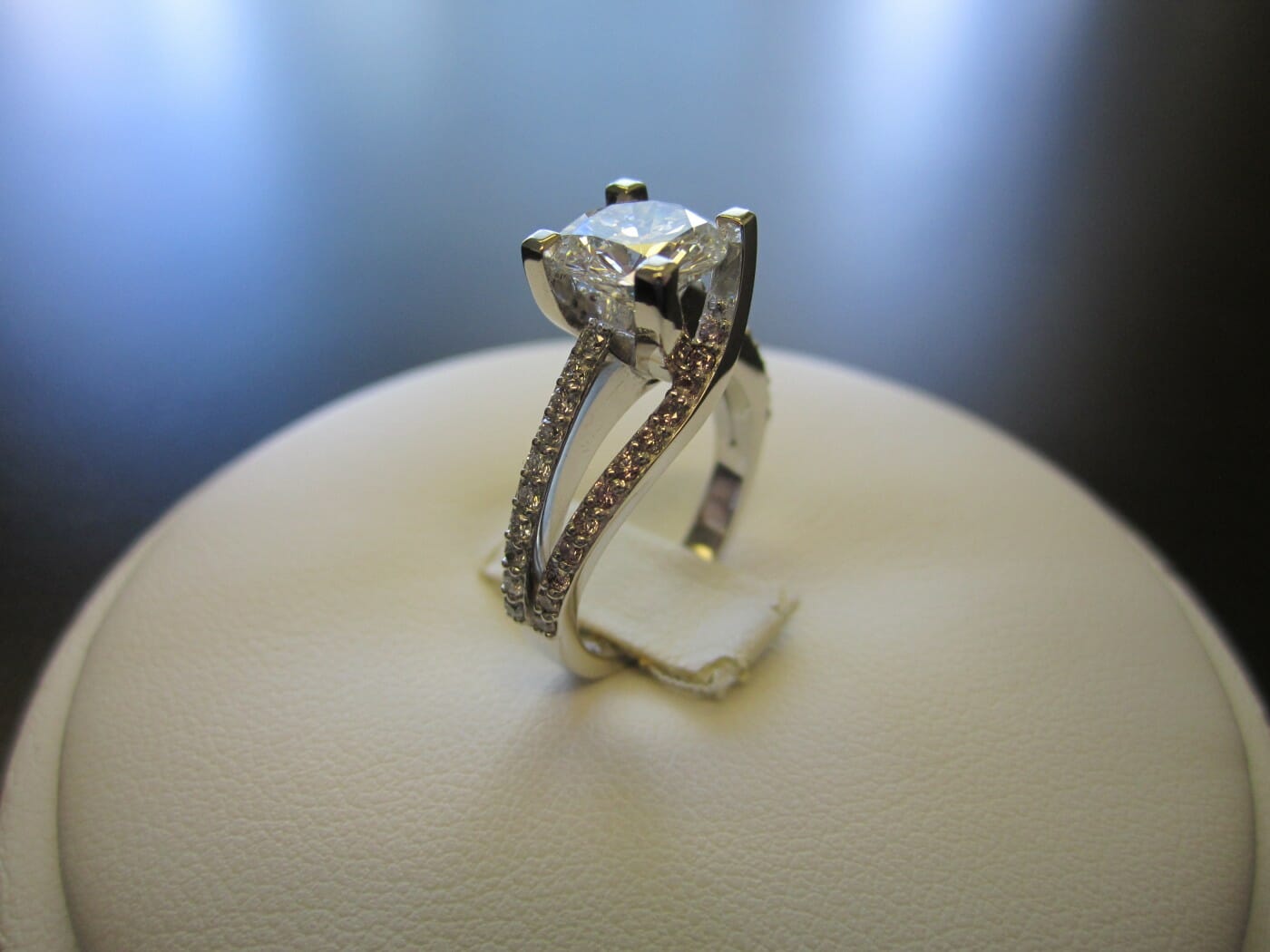 Diamond consists of a relatively simple lattice of carbon atoms wherein only a few impurities can substitute into the structure. Despite the apparent simplicity, the diversity of defects that can exist in the diamond lattice is astounding. Nitrogen is the most abundant impurity in diamond; one of the defects commonly seen in natural diamonds, the H4 defect, consists of four nitrogen atoms and two vacancies. It is strongly associated with B-aggregated nitrogen impurities, which consist of four nitrogen atoms surrounding a single vacancy. H4 is created through a fairly straightforward formation mechanism where a single vacancy is trapped adjacent to a B-aggregate of nitrogen. H4 is often seen in irradiated and annealed diamonds with suitable amounts of B-form nitrogen, and is a mature aggregate of nitrogen that is very difficult to achieve in synthetic diamond growth or even post-growth treatment.

We were very surprised to observe an H4 peak at 496 nm in a pink synthetic diamond grown by chemical vapor deposition (CVD) that was recently submitted to GIA’s Carlsbad laboratory for a synthetic colored diamond grading report. This 0.26 ct round brilliant (figure 1) was type Ib (single substitutional nitrogen impurities) with a very low total nitrogen content and no detectable A or B form nitrogen. FTIR spectroscopy also showed a peak at 3107 cm–1, indicating the presence of a defect consisting of three nitrogen atoms surrounding a vacancy along with a hydrogen atom.

In addition to the observation of the H4 defect (figure 2, left), the synthetic nature of the sample was revealed by the 737 nm SiV– defect in the photoluminescence (PL) spectrum (figure 2, right). The presence of (subtle) growth layers in the DiamondView fluorescence images provided further confirmation. This diamond was grown using gas that was doped with nitrogen, allowing its incorporation into the diamond lattice as single substitutional nitrogen. The pink color was produced by NV– centers created during post-growth irradiation and annealing treatment. Nitrogen aggregation from single substitutional nitrogen to the more complex B-form nitrogen requires very high temperatures and pressures: 2500°C and 9.5 GPa for several hours (I. Dobrinets et al., HPHT-Treated Diamonds: Diamonds Forever, Springer Science & Business Media, 2013, p. 41) and generally requires a high starting concentration of nitrogen. This CVD synthetic diamond had low total nitrogen content and was grown under vacuum and likely irradiated and annealed at atmospheric pressure, making the occurrence of H4 even more puzzling. It is possible that the H4 was created during the irradiation and annealing process, but among the many samples GIA has examined, this was the first observation of this defect in a CVD synthetic diamond.

Figure 2. Photoluminescence spectra of the pink CVD synthetic diamond showed the occurrence of an H4 defect (left) as well as a SiV– defect (right).
GIA
×